Old San Juan has many plazas and parks scattered throughout the city. Each one has a story behind it that offers a chance to learn about the city’s rich history. A list of what you will find as you tour about the city is below.
👨‍👩‍👧‍👦 Child Friendly Attraction

Click the names of the attractions in blue below to and a new window will open up with an eyetour.com video telling you more!

This plaza offers a great view of El Morro and the ocean.  Built in 1992, the plaza commemorates the 500 year anniversary of Columbus’ first voyage. The fountain represents the first 100 years after discovery. The needle-like structures point to the North Star used by explorers to determine their latitude. The sculpted staircases represent the next 4 centennials. The totem area is the highest point in the city.   One of the island’s premier artists, Jaime Suarez constructed the totem. The artist used black granite and ceramic replicas of archaeological artifacts.

Plazuela de Rogativa
Constructed in 1971, Rogativa features a bronze statue commemorating an event that took place in 1797. Under siege by Sir Ralph Abercromby, the town’s people asked for divine intervention. The women of the town carried torches and rang bells at night as they made a procession through the streets of Old San Juan led by the city’s bishop. The British soldiers mistook the commotion for reinforcements from Spain and sailed away.

Parque de la Beneficencia
A small park located near Casa Blanca; it has a great view of El Morro and adjacent areas.  The sculpture in the middle of the park, created by José Buscaglia, is called “The Citizen of the Americas” and commemorates Eugenio Maria de Hostos. De Hostos was an advocate for independence for both Puerto Rico and Cuba.

Parque de las Palomas 👨‍👩‍👧‍👦
“Palomas” is the Spanish word for pigeons and that is just what you will see here.  Hundreds of pigeons flock here daily.  It is a great stop for children. You can buy bird seed from a vendor at the gate to feed the birds. Be sure that you look for the holes in the walls that make a great place for pigeons to spend some time resting. This park is also a great spot to enjoy a view of the harbor and the city.

Paseo de la Princesa 👨‍👩‍👧‍👦
Take a walk down this 19th century tree lined esplanade, complete with antique street lights, statues, and benches.  At the end of your walk, you will find Raices Fountain which depicts the island’s diverse heritage.  During the weekends you can find artisans, street vendors and musicians along the Paseo de la Princesa enjoying some time here displaying their work and entertaining the crowds.

El Morro Esplanade👨‍👩‍👧‍👦
In front of El Morro, you will find an expansive green field. The breezes here are fabulous for kite flying and in fact on any given day you will see dozens of kites in the air here. It is a great place to bring the family, a picnic lunch and perhaps a kite or two and spend the afternoon.

Plaza de San José
A statue of Ponce De León stands at the center of this small cobblestone plaza. The artist casted the statue from English canons captured in 1797 when Sir Ralph Abercromy attacked the city. Several historic buildings surround this plaza such as the famous “Iglesia de San José.” 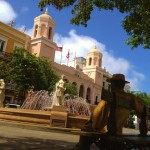 Plaza de Armas
Plaza de Armas is located at the heart of Old San Juan. It is the city’s main square.  This plaza has had many uses in its history from military parade grounds to a vegetable market. The four 100 year old statues represent the four seasons. Old San Juan’s city hall called “Casa de Ayuntamiento,” located by the plaza houses the Department of State.

Plaza Colón
Plaza Colón sits on the site of one of the original gated entries to the city. Built in the late 1800’s, the plaza showcases a statue of Christopher Columbus created to honor him on the 400th anniversary of the discovery of Puerto Rico. Artisans will often set up tents here to sell their work. 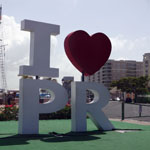 Bahía Urbana 👨‍👩‍👧‍👦
Bahía Urbana (“urban bay”) is an expanded waterfront pedestrian area that runs from Piers 1-4 all the way to Piers 7 and 8. Attractions include a carousel, restaurants, urban market, beach, children’s fountain, and a trapeze school.

The Smallest House in the World!

Top 10 Things to Do in Old San Juan